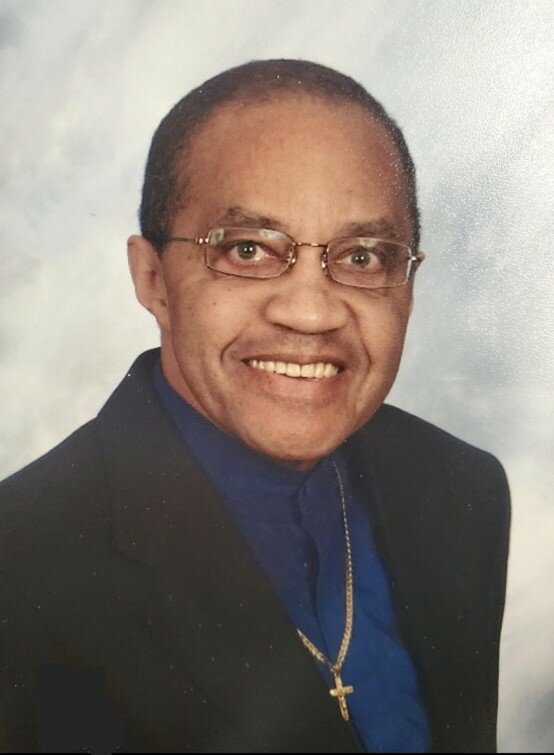 JOHNSON, FREDDIE LEWIS
Born on November 22, 1937 in Marshall, TX, Fred grew up in Los Angeles, CA until he moved to St. Paul, MN to attend college at the University of Minnesota. There, he met his loving wife, Karen (Kupfer) Johnson, to whom he was married for 55 years.
Fred worked initially in the business sector for Honeywell and NCR/Comten. He then pursued a vocation in non-profit. He worked as a Volunteer Coordinator for Hennepin County and later for the church in which he was married, Saint Peter Claver. He realized his true calling in 1997 when he became the first African American in Minnesota to be ordained a Catholic Deacon.
Deacon Fred departed this world on Saturday, October 1, 2022 to be with his Lord and Savior, as well as those that preceded him in death: his parents, Willie and Deborah (Sanders) Johnson, his beloved Uncle, Lewis “Buddy” Sanders, and his brothers, Charles Johnson and Everitt Johnson. He died peacefully, and will be greatly missed by those who had the privilege of knowing him.
In addition to Karen (Kupfer) Johnson, his wife, Deacon Fred is survived by his daughters, Vanessa McGough and Valerie (Johnson) Dean (Daymond); his sons, Craig Johnson and Vincent Johnson; ten grandchildren, one great-grandchild, and a host of nieces, nephews, cousins, and friends.
Family and friends are welcome to celebrate Deacon Fred’s life at the Church of Saint Peter Claver, 369 Oxford St N, St. Paul, MN 55104: Visitation will be held Monday, October 10, 2022, 5-7 pm and Tuesday, October 11, 2022, 10-11 am. Funeral mass will be held Tuesday, October 11, 2022 at 11 am.
Arrangements by Spielman Mortuary, St. Paul, MN.
Memorial contributions may be made to Doctors Without Borders or Alzheimer’s Association.
First African American Deacon in MN on PBS