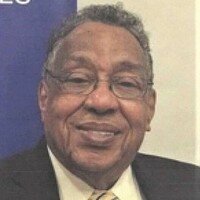 William (Bill) Wilson, Civil Rights Activist, educator, and founder of Higher Ground Academy charter school, passed away on Saturday, December 28, 2019, at the age of 79. Bill was born in Evansville, Indiana to John and Julia Wilson on July 17, 1940. He was the youngest of three children. Bill was a very kind and hard-working person who devoted most of his adult life to the struggle for justice and equality for all people. Founded Higher Ground Academy in 1999 which now has an enrollment of 1,020 students. Preceded in death by his parents, John and Julia Wilson, his brother, Donny Wilson, and his daughter, Pelina Michele Wilson. Survived by his wife, Willie Mae Wilson, his son, Bertrand Wilson (Cynthia), grand-daughter Naomi, sister LaFerne, cousin Margaret Wilson, nephew Martrell Sanders (Tia), and a multitude of friends. Visitation will be at the Progressive Baptist Church, 1505 Burns Ave St. Paul, from 10:00 to 11:00 a.m. Saturday January 4th with the funeral service to follow 11:00 a.m. He will be laid to rest at Historic Oakland Cemetery, 927 Jackson St., St. Paul.